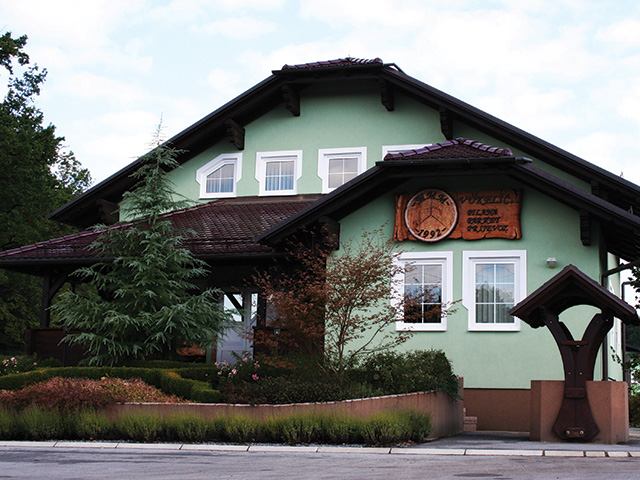 Wood connecting us through generations

Story about family that combines life coexistence with forests and the usage of wood in processing lasts for almost 70 years. We like to say that wood connecting us through generations, where our forests gave us life.
Wood is in our genes. That shows the story about family Vukelić as the initiator of this large family business.

“… After the Second World War in 1945, due to the big consequences of that event, need for the reconstruction of demolished houses and heavy transport vehicles increased. In 1949, Ivan Vukelić completed a master’s certificate for joiner and wheelwrighter where he started his own production. In the yard of the small family house, he had a manual machine for sawing named “Göpel”, as the first working machine in wood processing. The second part of production was named “Werkstatt”, where the first finished handmade wood products were produced: massive joinery, wooden wheelwright and barrels…”

“MMM” – a sign for a company with a heart

After the independence of the Republic of Croatia, Marijan Vukelić, the forestry technician by profession, in 1992 founded the modern company named “MMM-Vukelić ltd.” as a continuation of his father’s work that continues to this day. The number of employees at the beginning was only six workers, as our area was affected by warfare.
After the end of the Croatian war of independence in 1995, bigger investments in production facilities and technology began and has continued up to today, at least we have the latest modern technology for wood processing. By utilizing modern technology and the correct working techniques, our final products are made under strict standard point. The place of company is located on 75.000 m2 with all production facilities and working yard. From the true desire to continue the family tradition with just one man, today we employ 200 employees.

Finalizing wood is our passion

The activity we are dealing with is the production of final wood products, where wood is respected and recognized as a natural noble material we want to finalize in every detail. Precisely: natural wood veneer, solid wood panels, lamella production, parquet and flooring, all forms of exterior and interior joinery like doors, windows, drawers, beds, tables, chairs, stairs, fences, wall coverings and so on. The production program and the technology itself are European and Worldwide oriented. 80% of our products are exported to European Union and other continents.

Hard work of the owner and his family, which is transmitted from generation to generation, as well as all employees at the end gave the following successful results, because in the twenty-five years we have built a beautiful factory, capture new technologies and produce superior products that respects the market all over the World. This is confirmed by numerous awards and acknowledgments of which five are prestigious awards from the Croatian Chamber of Economy and the Ministry of Economy, Entrepreneurship and Crafts “Golden Marten”, the best exporter plaque in 2015 by the Ministry of Economy, finalist nominations of the “Golden Key” as part of main Croatian exporters‘ and others. The complete production program is certified by FSC® certificate, as well with the all necessary certificates that attesting the quality of the products. We are also holders of the certificated label “Croatian Quality” and “Original Croatian product“.

Ministry of Economy reward
for Best Exporter in 2015.

Check
all our
rewards

Copyright © 2017 - 2020 - MMM-Vukelić. All rights reserved. Made by Papar d.o.o.
By using our site you agree to the terms of privacy protection of your personal data. Read more